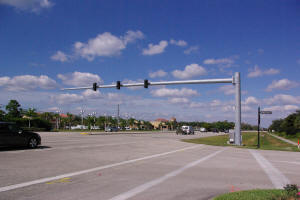 Drivers will notice a new traffic signal as they travel south on US 41 that will make them as well as firefighters a little safer on Lee County roads.  The traffic control signal is located at the corner of US 41 and Sweetwater Ranch Blvd, adjacent to Estero Fire Rescue’s station #42 and will be activated on Monday, November 23, 2009.  The new signal will allow Estero Fire Rescue firefighters to stop traffic for emergency vehicles.

“This signal will allow EFR Emergency vehicles to enter US 41 in a more timely and safe manner while responding to medical, fire or other emergency calls” states Fire Commissioner Dick Schweers.

Ned Dewhirst of Oakbrook Properties and Fire Commissioner Dick Schweers partnered up several years ago when the increase of traffic in the area became a safety issue for firefighters responding from Station #42 as well as drivers on the highly traveled road.  With the help of several Estero community members and County Commissioner Ray Judah, their efforts have been realized.

The traffic signal is the result of a public-private partnership between EFR and Oakbrook Properties, the co-developer of the Coconut Point mixed use development. This partnership allowed early construction of the traffic signal facility, with its interim use as an emergency/flashing signal.  The signal is projected to be a full working traffic signal in the future when warranted and approved by FDOT.   Estero Fire Rescue Station #42 serves the southern end of the Estero Fire District as well as providing mutual aid and closest unit response to the Bonita Springs Fire and Control District.