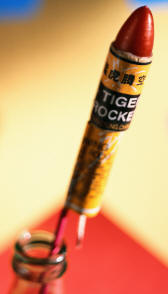 The injury estimates were obtained or derived from the Consumer Product Safety Commission’s 2015 Fireworks Annual Report by Yongling Tu.

The use of fireworks during the holidays is a common way to celebrate the New Year. But Estero Fire Rescue urges everyone to leave the fireworks to the professionals.

Southwest Florida is experiencing record low rainfalls therefore making it one of the driest and most active brushfire seasons. The New Year promises to be even worse. The lack of rainfall during the summer months have left a deficit in rainfall totals for the year, bringing the risk of fire danger even higher.  You can do your part to make sure that this season is a safe and happy one by attending a community fireworks presentation instead. Carelessly used fireworks start numerous fires each year and worse cause injury and death.

Florida currently prohibits homeowners from using fireworks with exploding or aerial properties. This means common fireworks like bottle rockets and firecrackers are prohibited.   Also, take time to make sure that, in the event of a brush fire your home is safe by making your home and property Firewise.

The Numbers Tell the Story

For statistics on fire and injury from fireworks, visit the website of the National Fire Protection Association at www.nfpa.org.