It all Started with a Cow 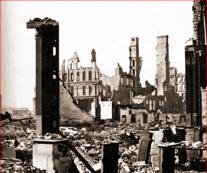 The week of October that includes October 9th  is designated as Fire Prevention Week.  But what does this mean and where did this come from.  It all started with a cow…..(or so the legend goes).

On October 8, 1871 in Chicago, a fire broke out that burned most of the great city to the ground.  The fire, dubbed the Great Chicago Fire, destroyed more than 17,400 structures and burned more than 2,000 acres. The damage left 100,000 people homeless and killed more than 250 people.  Although the fire began on the evening of October 8th, most of the damage to the city was done on October 9th and it continued to burn into the following day.

According to popular legend, the fire broke out after a cow – belonging to Mrs. Catherine O’Leary – kicked over a lamp, setting first the barn, then the whole city on fire. Chances are you’ve heard some version of this story yourself; people have been blaming the Great Chicago Fire on the cow and Mrs. O’Leary, for more than 130 years. But recent research by Chicago historian Robert Cromie (as recorded by the National Fire Protection Association) has helped shed light on what really happened.

“Like any good story, the ‘case of the cow’ has some truth to it. The great fire almost certainly started near the barn where Mrs. O’Leary kept her five milking cows. But there is no proof that O’Leary was in the barn when the fire broke out – or that a jumpy cow sparked the blaze. Mrs. O’Leary herself swore that she’d been in bed early that night, and that the cows were also tucked in for the evening.

But if a cow wasn’t to blame for the huge fire, what was? Over the years, journalists and historians have offered plenty of theories. Some blamed the blaze on a couple of neighborhood boys who were near the barn sneaking cigarettes. Others believed that a neighbor of the O’Leary’s may have started the fire.”

But the Great Chicago Fire was not the only fire to start on that fateful day in 1871.  In Northeast Wisconsin, a blaze started that has the distinction of being the most devastating forest fire in American history.  The fire was started by railroad workers clearing the tracks.  The fire, known as the Peshtigo Fire, roared through 16 towns, killing 1,152 people and burning 1.2 million acres!  It was named after the town of Peshtigo, Wisconsin who suffered the worst damage.  The town was completely destroyed within an hour.

These two fires changed the way firefighters and public officials thought about fire safety, education and prevention.  In 1920, President Woodrow Wilson issued the first National Fire Prevention Day proclamation, and since 1922, Fire Prevention Week has been observed on the Sunday through Saturday period in which October 9 falls. According to the National Archives and Records Administration’s Library Information Center, Fire Prevention Week is the longest running public health and safety observance on record. The President of the United States has signed a proclamation proclaiming a national observance during that week every year since 1925.