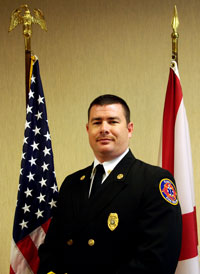 Assistant Fire Chief Mark Wahlig was born in Brunswick, ME and moved to Central Florida as a child. In 1992 he started his career in the fire service as a volunteer for the Apopka Fire Department just outside of Orlando and was later hired by the City of Altamonte Springs.

In 1998, he was hired by the Estero Fire Protection and Rescue Services District, later becoming Estero Fire Rescue, as a firefighter / EMT. As the demand for advanced life support services increased in the community he obtained certification as a State of Florida Paramedic.  He was subsequently promoted to Lieutenant followed by Battalion Chief.

In October 2008, he was promoted to his current position. As the assistant fire chief, he reports directly to the Fire Chief and is responsible for the supervision of three Battalion Chiefs, two Division Chiefs, the Information Technology Administrator and an Administrative Specialist.  He also assumes the duties and responsibilities of the Fire Chief in his absence.

According to Assistant Fire Chief Wahlig it is essential that Estero Fire Rescue continues to provide an excellent level of service that is competitive and cost effective through continued training and upgrading of our current services. “The demand for public safety continues to evolve requiring agencies such as Estero Fire Rescue to continually reevaluate goals, identify potential threats and trends and then plan accordingly.”