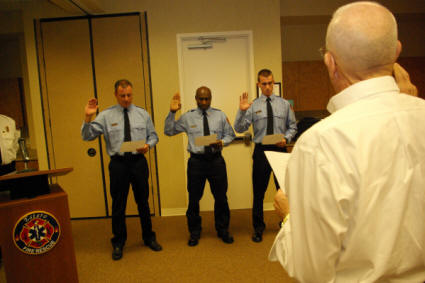 Estero Fire Rescue is proud to announce the addition of three new firefighters to the EFR family. Firefighters Christopher Intartaglio, Simon Weatherhead and Sean Fuller were sworn in by Chairman Dick Schweers of the Estero Fire Rescue Fire Commission Board on November 11, 2012 as family and friends looked on proudly.

The new firefighters completed their first day on the job on Nov. 13, but will be in training another month before being placed into their regular assignments. They will remain on probation for a period of one year, during which time they will float between all four stations. Please join us in welcoming our new firefighters.