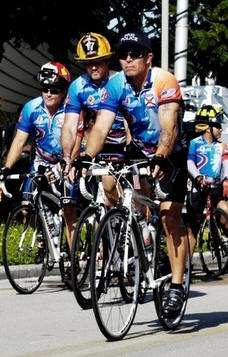 The Brotherhood Ride once again traveled to families of fallen first responders to offer support and present them with money raised from grateful citizens for their sacrifice.  EFR members Lt Scott Labree and Firefighter Jerry Krohnfeldt rode with the 29 riders honoring Florida’s fallen on their 8-day trek that took them from Naples, Miami, Brooksville and St. Pete.

The introductions came at the June 2011 funerals for both men, who were killed while battling a wildfire near the Florida-Georgia border.

“It was tough,” said Elder, a 26-year veteran of the Florida Forest Service. “We’re a statewide agency, so even though I didn’t know Josh and Brett personally, they’re still part of the family.”

Elder carried the banner of the Florida Forest Service on Sunday as one of 31 bikers embarking from Cambier Park in downtown Naples on the eight-day Brotherhood Ride, which will first circle over to the east coast and finish in St. Petersburg. The fifth-annual ride will raise money for the 11 Florida firefighters and law enforcement officers killed in the line of duty last year.

Inspired by the heroism of nine Charleston, S.C., firefighters who died while working a warehouse blaze in 2007, the Brotherhood Ride has attracted both local and out-of-state bikers, helping raise about $118,000. Past rides have honored Fort Myers police Officer Andrew Widman, who was shot and killed in July 2008 while on-duty, two Houston firefighters who died while battling a 2009 Easter Sunday house fire, and the first responders killed following the 9/11 terror attacks.

This year, the 550-mile trip is dedicated to the eight law enforcement officers and three firefighters killed in 2011 while working in Florida. The 31 bikers represent 17 different police and fire agencies, including six from Southwest Florida and two from out-of-state — the Houston and Charleston fire departments.

“The support for things like this is always great. It’s something unique to this profession,” said Houston firefighter Tim Dunn, a charcoal-colored helmet atop his head. “There are four of us from Houston here today, yet this is all for guys from Florida.”

Firefighters hit the road wearing work helmets, while police officers and sheriff’s deputies donned caps with insignias of their respective agencies. More than 100 family members, co-workers and supporters bid adieu to the bikers Sunday morning as they set off on a 102-mile first leg, taking them south along U.S. 41 to Miami.

Many bikers have become repeat riders, including Tampa police Sgt. Doug Groves. For the second straight year, Groves is joining the Brotherhood Ride to honor Tampa police officers Jeffrey Kocab and David Curtis, both 31, who were shot and killed during a traffic stop in June 2010.

“The community continues to be very supporting of us,” Groves said. “In times of need like we had, you really see the true colors of citizens that came out of the woodwork. The citizens have been behind us 100 percent.”

For Jeff Morse, a North Naples firefighter who founded Brotherhood Ride, Sunday’s send-off caps a frenetic fundraising campaign, bringing a sense of finality to promises made to families of the fallen.

“We do so many fundraisers all year long, but especially these last two months, it feels like we have one every weekend to raise money for the families,” Morse said.

“Now the day is here and we can finally prove to the families that we’ve meant what we said we would do all along.”