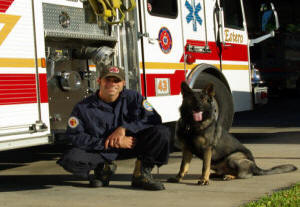 Canine searchers play a critical role during structural collapse incidents. The canines help search teams to locate victims, using their incredible sense of smell to detect live human scent, even from a victim buried deep in the rubble.  Each canine team must pass a rigorous certification in order to work in search and rescue.

The testing consists of seven disciplines: obedience, bark alert, direction and control, agility, emergency stop, long down and rubble search.  Training for a canine team can take one to three years to master the skills needed and ongoing training is vital to their success in the field.