At its monthly Board of Fire Commission Meeting on Tuesday, October 12, two outstanding firefighters were recognized for their commitment to their department and their community. 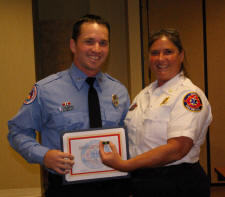 FF Jared Whelan was presented with the Community Service Award an award issued to an employee for an outstanding act, achievement, or exceptional service to his/her fellow man or community that is relative to the ideals of the community and overall public good. This award is for service not normally recognized or expected as a normal part of the nominee’s duty and be obtained or accomplished during the employee’s personal time.  FF Whelan was recognized for his commitment to a young man in the community by providing him educational and emotional support as well as his unwavering devotion to his future. 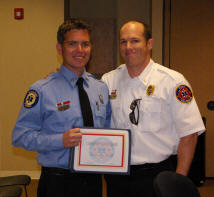 FF Clint Skelton was presented with the Employee of the Quarter Award.  This award is given to an employee for exceptional performance above and beyond the call of duty. FF Skelton was nominated for this award for his dedication to his community and his commitment to the Estero Fire Rescue Explorer Program.  The Explorer program is a program designed to introduce young people to the field of Firefighter and Emergency Response.  The program is open to those ages 14 to 20 and teaches members multiple fire and rescue skills as well as emergency medicine.  FF Skelton began his career as an Estero Fire Rescue Explorer, working his way up through the ranks to become Captain of the post.  After completing fire school and receiving his Emergency Medical Technician license, he was hired by Estero Fire Rescue in September 2007 where he has continued to be an important part of the Explorer program.