At its monthly Board of Fire Commission Meeting on Tuesday, November 9, an outstanding employee was recognized for his commitment to their department and their community. 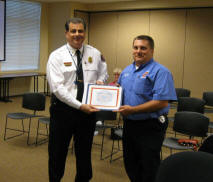 Fire Inspector Scott Danielson began his employment with Estero Fire Rescue on April 26, 2010 and, since that time has proven to be a valuable asset to the district and the employees of EFR.  Danielson was previously employed by the North Fort Myers Fire District and brings with him valuable knowledge and experience that has allowed him to excel from his first day.  He continues to make a positive impression with the public and his co-workers, offering constructive solutions to problems and making himself readily available to others.  Because of his commitment, Danielson was recognized as Employee of the Quarter. 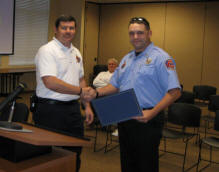 Additionally, FF Thad Stevens was presented with an award for ten years of service to the public.   FF Stevens joined Estero Fire Rescue November 3, 2000 and has been an instrumental part of the departments continued success.