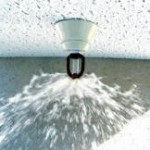 The system consists of a series of piping connected to the water source and supplying the sprinkler heads throughout the home. Each residential sprinkler head is equipped with a heat sensor set to break at a prescribed temperature  (usually 135 – 145 degrees Fahrenheit).

Only the sprinkler in the immediate area of the fire activates.  In the past 100 years of fire sprinkler history, over 95 % of all fires in sprinklered properties are controlled by one or two sprinklers.

Despite “site gags” on TV sit-coms, smoke does not trigger sprinkler operation. The rest of the sprinklers in a house will not activate unless there is also a fire in that location.

Modern fire sprinklers provide unobtrusive protection. Unlike old style commercial fire sprinklers, residential sprinklers are small, and can be recessed into ceilings and walls. Some models are completely concealed by cover plates that can be matched to room paint colors.