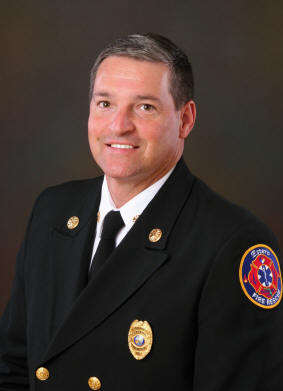 On September 10, 2008, the Board of Fire Commissioners unanimously appointed Scott Vanderbrook to the position of Fire Chief.  Chief Vanderbrook has served as Interim Fire Chief since May 2, 2008.

Chief Vanderbrook was born and raised in Newark, a small town in upstate New York. He started his fire career as a volunteer firefighter at the age of 18 and belonged to the Deluge Hose Company as part of the Newark Volunteer Fire Department.

In 1989, Chief Vanderbrook moved to Florida to continue his firefighting career and was hired as a firefighter/EMT with the City of Oviedo Fire Department. He worked his way up the ranks to Division Chief responsible for Training, Emergency Medical Services, public information and public education.

In November of 1998, Chief Vanderbrook was hired by Estero Fire Rescue to assist in the development and growth of a young organization and has served in many positions at Estero Fire Rescue over the past several years. Chief Vanderbrook is a member of the Lee County Fire Chief’s Association and the Florida Fire Chiefs Association, in which he has served on many committees within both organizations. He also serves as a task force leader for Florida Task Force #6 of the Urban Search and Rescue (USAR).

Chief Vanderbrook is a dedicated and driven individual who demands excellence not only from himself but from his staff, all who respond to 911 calls. “It’s a rewarding career. Every day is different. You never know what will happen so you always have to be on top of your game, because you never know what will come up. Most importantly, it feels good to provide a high level of service to the public, our customers.”