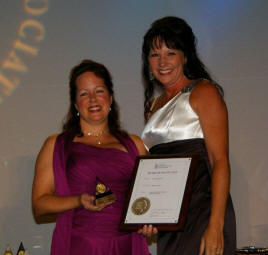 Estero Fire Rescue is pleased to announce the departments’ recent win at the Florida Public Relations Association’s Image Awards. The department brought home the Award of Distinction as well as the Judges Award for the 2011 Firefighter Charity Calendar.

This is the second year the Estero Fire Rescue has been recognized at both the local and state levels for public relations efforts, bringing home a total of six awards in two years.The calendar and public relations campaign entitled ‘Posing for a Cure’ raised money for two separate charities:  The Estero Fire Rescue Education & Safety Fund and Partners for Breast Cancer Care.  Through extensive public appearances, the sales of the calendar exceeded expectations which allowed the department to donate $7,500.00 to PfBCC and $5,000.00 to the Safety Fund.

The Golden Image Awards have become a standard of public relations excellence in the state of Florida and demonstrate the very best examples of innovation, planning and design. To qualify for judging, an entry must incorporate sound public relations research and planning. Entries also must meet the highest standard of production, execution and evaluation of results and budget.